Saw this today from the IODPA

Remember the home office circular 46/2004? It was an attempt to get ALL IOD pensioners reduced to Band 1 when they reached the age of 65, (normal retirement age.) What a circus that started and it went on for years! It was then found in High Court to be unlawful and everyone was (supposed to be) returned to their original banding. The HO decided not to give out any more pension advice after that. There is a saying that out of all evil comes good, true in that case because what happened as a result was that IOD pensioners became aware that not all was right about IOD pensions and started gathering in a group called PIPIN. That group is what helped to get things put right. Following that ‘episode’ it seems that the practice of mass reviews started to occur among some Forces. This has led to the birth of the IODPA.org, a charity, which helps any and all IOD pensioners to be protected from the unlawful demands of the Force they had worked for, and to stop the bullying and harassment that comes along with those intended reviews.

The worst thing for those Forces was that ALL IOD pensioners are now becoming aware of all that is going on! They are educating themselves into the Police IOD Pension Rules and Regulations so can now identify the peculiar little changes that each Force seems to be attempting in order to save a few pennies from IOD Pensions! I wonder if the truth will ever be known about the extra costs of legal fees and SMP costs and appeal costs involved and if there has been/ will be any profit made from all these attempts?

Wake up Essex CC and smell the coffee! You have circulated the worst contact so far in notifying an IOD Pensioner that they are to be reviewed. You MUST adhere to the rule that the review is to determine if there has been any substantial change in any ones condition FIRST! I sincerely hope that ALL Band 1 and Band 2 Pensioners demand to have their cases reviewed! Medical Science has learned a lot these days and you may have a lot of Band 1’s who were retired for depression many years ago discovering that they actually have PTSD!!!!.

During this week of Celebration and Gratitude to Volunteers, we also mark the 75th. Anniversary of the D-Day Landings. So, our unique volunteer member, George Thompson, for a case study fits both categories.

George was little more than a boy when he joined the Royal Navy just before World War Two.

By the time of the D Day Landings he was a Royal Marine Commando and one of the first service personnel to arrive on the Normandy beaches to clear and secure them prior to the landing craft’s arrival.

In 2016 he was one of those honoured by the French Government, when he was awarded the Légion d’Honneur, the highest French order of merit for military service. A very proud moment for his wife and family and also for the Wounded Police and Families Association.

After the war, George worked in America before returning to Northern Ireland where he joined the Royal Ulster Constabulary and continued his service to the community. He was one of the first members of the Bomb Squad when The Troubles began.

A great organiser and motivator, he was a founding Board member of WPFA and continued to Volunteer within the group for as long as he was able and not long before his death.

He had a wealth of knowledge and every problem was an opportunity for him to offer sterling advise.

He often shared stories of his war and police stories with the children and young people in the group. His great escape from a lavatory on a moving train when under arrest for not returning to base after a period of leave, left the smaller kids in awe and wondering if George was the ‘’real superman?’’.

George was the hero who we all looked up to. He gave his time and efforts freely to WPFA and was so proud of the group he had helped to establish. We miss him and that standard of service that he represented . 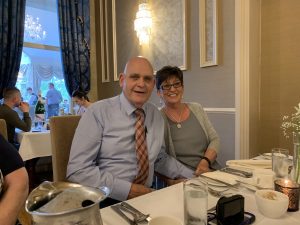 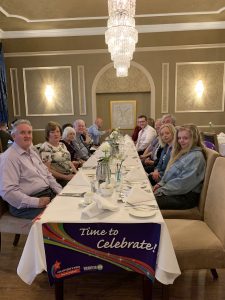